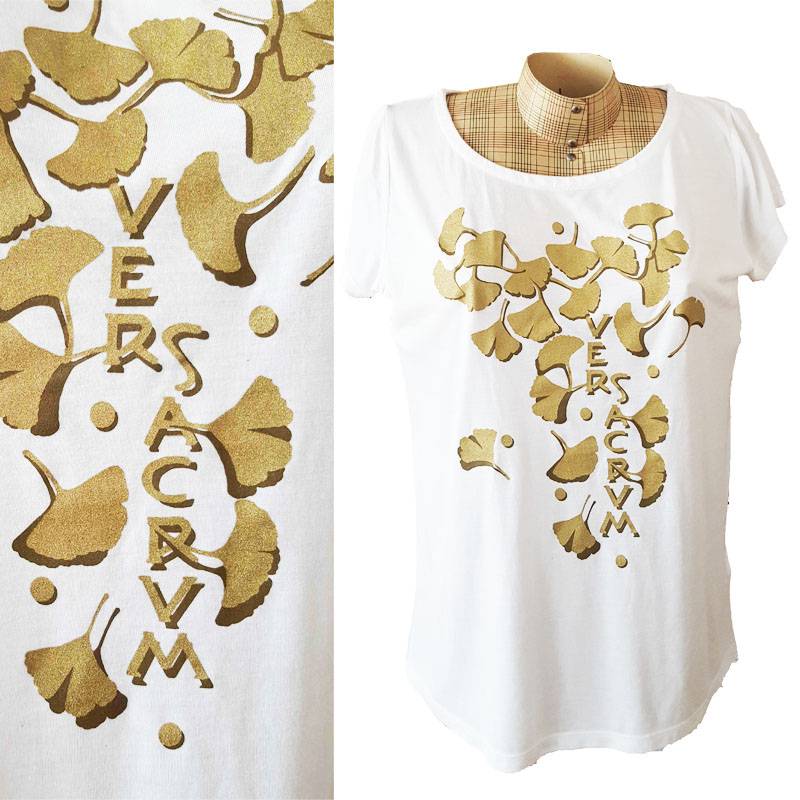 At first there was the idea of imprinting a shirt with something that would remind of a necklace. In Vienna numerous motives are to be found so I chose the days of the Vienna Secession, the golden age. Various numbers of ginkgo leaves had to be designed and arranged in a way that would make them appear to be a piece of jewellery. To avoid a mere two-dimensional effect I put a shadow underneath each leave making the necklace seem to be three-dimensional.

In European and Japanese art the ginkgo is a symbol of luck. Its leave, a symbol of peace and reason, shines golden, a colour which in turn represents wisdom, ecstasy and life.

The shirt should be of a soft material – preferably bio-cotton. After an in-depth search I came across a company that had Oeko-Tex-, OCS blend-, GOTS-, GRS-, vegan- and PETA- certifications in their programme. The producers are member of the Fair Wear Foundation (fair pay for the tailors and seamstresses) and manufacture ecological or recycled materials that are produced and processed with the know-how of an Upper Austrian company in Lenzing (Modal®/ Tencel®).

Wear the VER SACRUM Shirt in this spirit! The story of the shirt Ver Sacrum.

Show reviews in all languages (5)

Be the first to review “VER SACRUM Shirt” Cancel reply