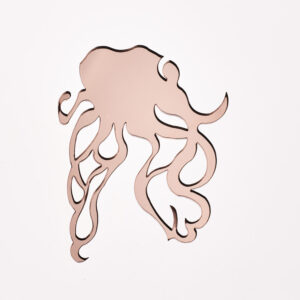 In dealing with the exhibition objects for IRON MEN in the Kunsthistorisches Museum, I was not only concerned with the weapons and knight’s armour, but also with their engravings and ornaments on the artistically crafted equestrian armour. In the process, I found some interesting details, such as the ornament with the fire plates and flames in the boy’s cuirass of Karl V.

With the brooch of THETIS I wanted to create something new according to the time and varied with the outlines of the fire plates and its flames. These appeared to me more like the tentacles of an octopus and I complemented the octopus with eight “feet” (Greek: októ poús) as well as an eye on the side, a figure emerged like that of Thetis, the shape-shifter.

The fragmented mirror glass reflects the space, animates the counterpart and shows the multiple view, i.e. front and back, it opens the space into three-dimensionality in a very simple way. Mirror acrylic glass is a very modern element, and in its colour/ reflection gives off a hint of the precious metals steel/silver and gold.
The contemporary use of new materials, produced and lasered with high tech machines, brings the jewellery into the 21st century and is thus a sophisticated contrast to the plate art of the Middle Ages. More about the story “the brooch of the Thetis”

Show reviews in all languages (11)

Be the first to review “brooch of THETIS” Cancel reply